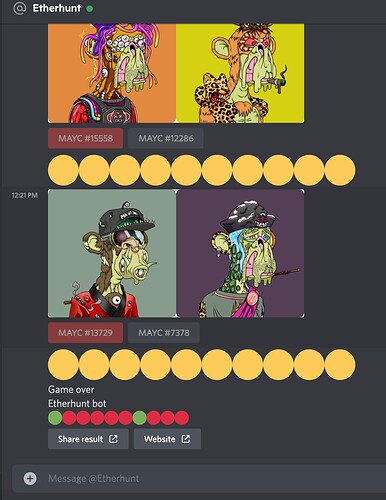 tl;dr
I’d like to propose a Rarity game with the Doodles collection for Discord.

This would be a Discord Game that will orchestrate the whole Doodles Rarity Game. The game will have several modes, leaderboard and points system. The Discord bot is one of the advanced ones on Discord and has very interesting game mechanics. The super cool thing is, that the NFT Game that we will create is very engaging and fun the for Discord community. The game creates daily habit of playing and sharing your scores.

Why:
The idea of the Doodles Rarity Discord bot will be to extend the daily “gm” and create fun mechanism for the community to play games and get familiar with the Doodles collection.

Team
We have been in crypto since 2017 and are a small team of product and developer guys. We have created 4 successful crypto products and we plan to continue doing so.

Timeline:
Depending on if a proposal could be approved, we believe we could go to market in 10 days.

The Doodles community is huge and we would have to make sure we have 100% uptime of the game, thus we will use big part of the budget to upgrade our servers to handle the influx of traffic.

I really hope you find our proposal unique and fun. If approved we will be a bit scared, but very excited to create the game.

We went ahead and created the proposed Doodle Web and Discord game!

Brief overview:
Compare Doodle NFTs based on their rarity score.
One game per day, ten seconds to guess.
Share your score on Twitter and Discord.
PVE Mode - Where you can play alone.
PVP Mode - Challenge server members and play short Doodles NFT Games.

The game can be played on the website from this link: Etherhunt Doodles

Or you can add Doodles NFT Game on Discord by inviting the Etherhunt Discord bot: Discord Bot

The admins of NFT servers are able to:
/addgame
This would give you the option to add Doodles as NFT Game.
/game-stats
Show all the users who have played today.

Here is also video of the web game: